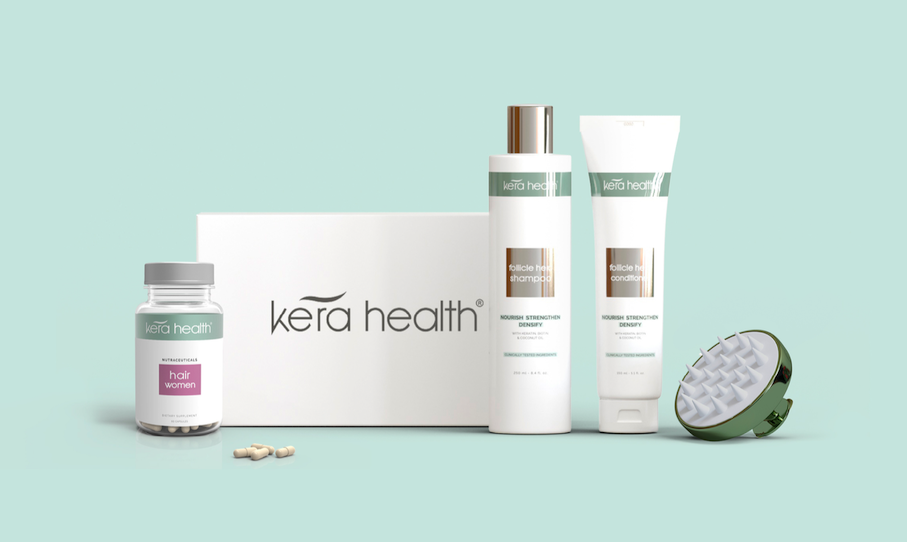 We have three sets of KeraHealth products to give away, each set value £200

As the Managing Editor of a leading glossy magazine, Fay Afghahi had access to any cosmetic product she cared to try. But nothing helped Fay’s particular beauty woe – thinning hair prone to breakage, a condition that affects about one in five women under 65 in this country.

Fay always had fine hair. ‘I was called “blonde fluffy” when I was young.’ But it became more serious. ‘I had episodes of hair thinning and loss since my teens. My hair fell out when I had each of my three children. Then I had a bad stomach illness and masses of hairfell out – I lost about 60% so it was extremely sparse.’

Hair loss is linked to many different causes but, as Fay and many other sufferers have found, the emotional effects are often devastating.  ‘It really affected my confidence tremendously,’ she says. Fay’s concerns were mirrored by many of her readers: ‘So many wrote in with the same problems, particularly around the menopause when oestrogen levels decline affecting skin and hair. I discovered hair loss is one of the most widely used search terms online.’

As nothing she tried improved the situation and Fay was aware of the limitations and side effects of pharmaceutical treatments, she started to research other possibilities. A chance meeting led her to scientists in the south of France who had developed a novel combination of the 18 amino acids needed to create each strand of hair.

‘Hair is nearly 100% keratin, which is composed of these amino acids. Eight of these can only be obtained through our diet. These experts had developed a proven compound named KerCysteine®, which contains all these essential amino acids so your body can produce the keratin necessary to reduce hair loss and grow healthier hair,’ Fay explains.

KerCysteine® became the basis of KeraHealth nutraceutical supplement range formulated to help hair grow back after hair loss and for thinning hair. The supplements also contain potent vitamins and minerals to support the amino acids, and also to help keep body and mind healthy. The formulations are designed to make the nutrients highly available, an important factor in making them effective. There’s a version for men as well as women.

If you have an underlying medical condition, hormonal disruption or nutrient deficiency, this would have to be addressed by a medical expert.  Fay points out, however, that ‘while KeraHealth Hair would not be able to stop hair loss from these causes, it could help with growing back your hair, as long as the follicles are still alive.’

KeraHealth also offers a really fabulous duo of Follicle Hero ShampooandConditioner, with KerCysteine® plus natural ingredients to nourish the scalp and stimulate hair growth. When we tried the products, we were pretty amazed at the shine and bounce and volume. Fay recommends working in the Conditioner with her Scalp Energiser, which is really worth doing.

To enter this prize draw, simply fill in the form below. You’ve nothing to lose and maybe a thicker, stronger, healthier head of hair to gain. For more information about the KeraHealth range, visit kerahealth.com and follow them on Instagram @kerahealth.

THIS PRIZE DRAW WILL CLOSE ON WEDNESDAY 3rd FEBRUARY 2021

When Healers Do Harm: Women Serial Killers in the Health Care Industry